The U.S. Supreme Court has ruled against a bid by President Donald Trump to end a major programme which protects young immigrants from deportation.

Justices upheld lower court rulings which found that Trump’s move to rescind Deferred Action for Childhood Arrivals (DACA) was “unlawful”. The decision to uphold the ruling means that “Dreamers” – over 650,000 young people who entered the U.S. without documents as children – will be protected.

Some of those who were awaiting a decision on the program included doctors who were fighting the coronavirus.

The Supreme Court took up the case after lower courts ruled that Trump’s administration did not adequately explain why it was ending the programme, and criticised the White House’s “arbitrary and capricious” explanations. 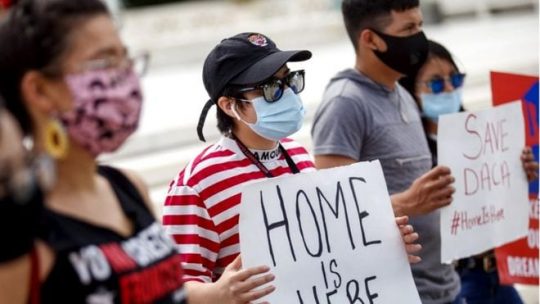 A number of people demonstrated outside the Supreme Court on Thursday. [Image: BBC]

DACA enables young people who were raised without legal immigration status in the U.S. to obtain renewable, two-year authorizations to live and work in America.

On Thursday, the justices voted 5-4 to uphold the lower court’s findings that the Trump administration’s order violated the Administrative Procedure Act.

The case was not primarily based the legality of the ending of DACA, rather whether the Trump administration followed proper procedure in its proposal to end DACA. The majority opinion was “all parties agree it may”.

“These horrible & politically charged decisions coming out of the Supreme Court are shotgun blasts into the face of people that are proud to call themselves Republicans or Conservatives. We need more Justices or we will lose our 2nd. Amendment & everything else. Vote Trump 2020!”

The decision was also criticised by Justice Clarence Thomas, stating that:

“It has given the green light for future political battles to be fought in this court rather than where they rightfully belong – the political branches”.

President Trump has routinely said that he supports the people who are protected through the DACA, though his actions and statements have often been contradictory.

The Legal Troubles of DACA

Barack Obama enacted DACA back in 2012. The legality of the enactment of the act was first challenged back in 2014. In September of 2017, the policy made its way to the legal system after a challenge from the Trump administration.

President Trump has routinely said that he supports the people who are protected through the DACA, though his actions and statements have often been contradictory.

The Trump administration has maintained that shutting down DACA is necessary because it was implemented illegally by Obama in 2012. Trump claimed that eliminating the program would force Congress to reach a deal which supported Dreamers.

The lower courts have debated the legality of DACA and their decisions have allowed DACA to continue, but only for those who have already received it.

As of September 2019, 652,880 people had DACA, including up to 27,000 healthcare practitioners and nearly 9,000 teachers. Around 80% of those who have it are from Mexico, with nearly half living in California and Texas. 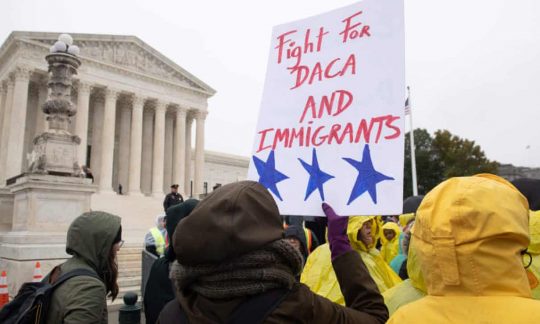 There is broad support for Dreamers among Americans. [Image: Guardian]

The deliberations in the Supreme Court have been focused on government rule-making, rather than whether the program should exist.

In November of last year, there was an 80-minute oral argument in the Supreme Court during which Sonia Sotomayor, the first Latina supreme court justice, explained that in the decision to rescind DACA, the Trump administration did not explain “that this is not about the law, that this is about our choice to destroy lives”.

Could DACA Still be Rescinded?

The Supreme Court decision reached on Thursday still leaves the door open for the Trump administration to seek to end the DACA program.

However, such a move would be at odds with popular opinion. There is broad support for Dreamers in America, even among a majority of Trump supporters. A June 2020 Pew Research survey showed that 74% of Americans favoured a law which would give legal status to undocumented immigrants who were brought to America as children.