The Trump administration is set to implement further restrictions to legal immigration across the US, pointing to Covid-19 as its justification. Yet many are highlighting the contradictions of Trump’s immigration bans since the president is currently arguing for reopening the US economy.

Throughout the Coronavirus pandemic, the Trump administration has pushed through a series of significant immigration measures which had faced resistance prior to the infectious disease outbreak.

Many now fear that Trump is using the Covid-19 pandemic to implement substantial immigration restrictions to incorporate his own thinly veiled agenda.

Notorious for scapegoating immigrants, Trump’s decision to push forward with sweeping immigration bans and limitations has been met with criticism and outrage.

Despite business leaders informing Trump that immigration is crucial to the recovery of the economy, the president seems to be dismissing such advice.

An array of visas which grant immigrants permission to temporarily work in the US are set to be suspended for a period of time, including L-1 visas for intracompany transfers, H-1Bs for workers in a speciality occupation, H-2Bs for temporary non-agricultural workers and J-1 visas for exchange visitors.

The H-2B workforce coalition urged the president to reassess these immigration restrictions, reinforcing that visas are ‘a critical safety valve for companies to address seasonal labour needs’. This is as a direct result of the struggle to find American workers to fill short-term jobs.

Notorious for scapegoating immigrants, Trump’s decision to push forward with sweeping immigration bans and limitations has been met with criticism and outrage

Groups which advocate for reduced immigration have hit back against criticism, arguing that it such restrictions are essential in order to protect American workers. 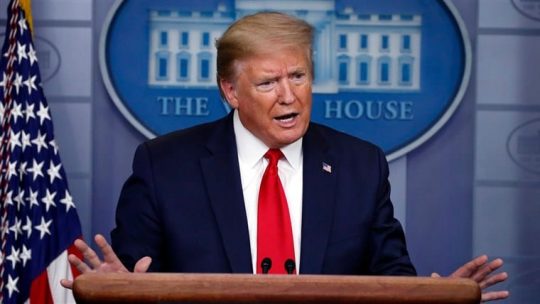 This is not the first time since the Covid-19 pandemic that Trump has introduced vast immigration restrictions. In April, the White House immigration proclamation outlined a series of modifications to the US immigration system:

“Existing immigrant visa processing protections are inadequate for recovery from the COVID-19 outbreak.  The vast majority of immigrant visa categories do not require employers to account for displacement of United States workers.

“Moreover, introducing additional permanent residents when our healthcare resources are limited puts strain on the finite limits of our healthcare system at a time when we need to prioritize Americans and the existing immigrant population.”

One such exception includes those who wish to enter the US on an immigrant visa as ‘a physician, nurse, or other healthcare professional

The proclamation then proceeded to declare that immigration to the US would be temporarily prohibited with limited exceptions.

One such exception includes those who wish to enter the US on an immigrant visa as ‘a physician, nurse, or other healthcare professional; to perform medical research or other research intended to combat the spread of COVID-19; or to perform work essential to combating, recovering from, or otherwise alleviating the effects of the COVID-19 outbreak.’