A Guatemalan man has died from COVID-19 whilst being held in US immigration custody, the US Immigration and Customs Enforcement (ICE) has confirmed.

Santiago Balen-Oxtag, 34, sadly passed away early on Sunday morning at a hospital in Columbus, Georgia.

In a statement released on Monday, the ICE informed that Mr Balen-Oxtag had been staying at the hospital since the 17th of April. He had been transferred to the medical facility from the Stewart Detention Center, a privately operated prison close to Georgia’s border with Alabama.

According to the ICE statement, Mr Balen-Oxtag’s preliminary cause of death was found to be “complications related to COVID-19”. The statement went on to add that the agency would be conducting an investigation into the circumstances surrounding the death:

“ICE is firmly committed to the health and welfare of all those in its custody and is undertaking a comprehensive agency-wide review of this incident, as it does in all such cases.”

As it stands, there have been 16 recorded cases of COVID-19 among inmates at the Stewart Detention Center, a facility that is currently home to 1,752 immigration detainees. 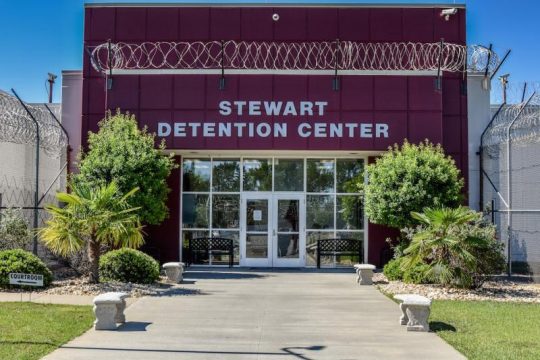 Mr Balen-Oxtag had been first detained by the US Immigration and Customs Enforcement back in early March. It remains unclear whether or not he was suffering from any underlying medical conditions. It is however known that he had been granted a voluntary departure to Guatemala as part of the detention process.

The US immigration authorities have contacted Mr Balen-Oxtag’s family, the Guatemalan government and the offices of inspector general and professional responsibility within the US Department of Homeland Security to notify of the death.

The incident comes less than a month after the death of Carlos Ernesto Escobar Mejia, an immigrant from El Salvador who had been detained at the Otay Mesa detention center in San Diego.

Mr Mejia, 57, had been living in the US since the 1980s, having fled El Salvador following his brother’s murder during the war. His death is believed to have been preventable, as he had been complaining for weeks about his ill-health and stating that his medical history- which included diabetes, high blood pressure, heart problems and a foot amputation- placed him at extremely high risk of COVID-19.

COVID-19 has infected considerable numbers of detainees inside US detention centres. They are blighted by many of the issues that affect detention centres in the UK, such as overcrowding, poor sanitary practices and substandard conditions.

At present, more than 1,200 immigrants in ICE custody- over half of the 2,394 that have been screened- have tested positive for COVID-19.

ICE has introduced some measures in response to the outbreak of COVID-19- such as a scaling back of arrest operations and a review of the most at-risk detainees in custody-  it continues to hold more than 26,000 inmates across the USA. In addition to this, they are still proceeding with deportation flights despite the current restrictions on travel.

Immigrant rights activists have called on ICE to release detainees- particularly low-level offenders- from custody due to the risk of COVID-19.